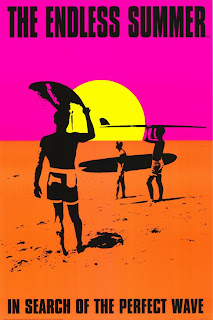 The end of summer 2011 is in sight, so an appropriate story is in order:

High School classmate Bob Halstead and I trekked into downtown Boston one evening in 1966 to view the summer surfing classic, The Endless Summer at the artsy Exeter Street Theatre.

Director Bruce Brown follows two surfers, Mike Hynson and Robert August, on a surf trip around the world. Despite the balmy climate of their native California, cold ocean currents make local beaches inhospitable during the winter. They travel to the coasts of Africa, Australia, New Zealand, Tahiti and Hawaii in a quest for new surf spots and to introduce locals to the sport. And in doing so they made a film that would resonate among spirited outdoor-loving youth for at least the next 100 years. Setting out, the goals weren’t quite so lofty for the film itself. Brown had created surfing films before, but The Endless Summer had the right timing, superb film quality, great scenery, great musical score, all wrapped in a semi-amateurish but disarmingly interesting acting style.

The narrative presentation eases from the stiff and formal documentary of the 1950s and early 1960s to a more casual and fun-loving personal style filled with sly humor. The surf-rock soundtrack to the film was provided by The Sandals. The "Theme to the Endless Summer" was written by Gaston Georis and John Blakeley of the Sandals. It has become one of the best known film themes in the surf movie genre. I still have the original LP and in my freshman year of college had an original full-size wall poster. Wish I still had that sucker. 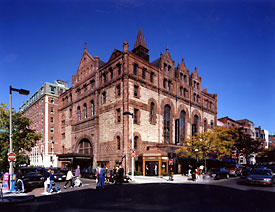 As far as the Exeter Street Theatre itself, it was housed in the First Spiritual Temple at the corner of trendy Exeter Street and Newbury Street in Boston. The theater opened on May 4, 1914, with 1,376 seats and was known world-wide to serious movie-goers who referred to it as the Grand Dame of Boston theatres. The movie theatre was notable both for its ambiance ("You felt like you were in some kind of Tudor manor or English country church") and programming ("It was a theater where people did not call to see what movie was playing, but called only to determine if the movie had changed)."
The theatre closed its doors in 1984, becoming a two-story Waterstone’s bookstore which was badly damaged by fire in 1995. The building reopened in fall of 2005 as a Montessori school.

One of my favorite movies of all time. I remember making Mom and Dad take me (us?) to the drive-in in Wellfleet to see it - I'm sure they were bored to tears. I had the poster, too - and just saw it recently down at the Outer Banks.

I love the Wellfleet Drive-In. It's a classic in itself.

Based on your post, we watched this movie last night (Netflix instant view). It certainly is a period piece and has some historical value. The commentary would not pass any "PC" standards today, but was amusing in places. I think I missed the movie during the 60's, but the music was certainly familiar. Thanks for the ride in the way back machine.