Barry and the Remains 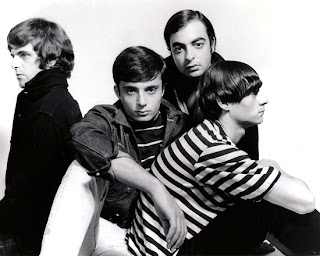 The Remains in 1965: (from left) Bill Briggs, Chip Damiani, Barry Tashian, and Vern Miller. Photo by Bill Freeman
Second in my trio of college-launched rock groups is Boston University’s Barry and the Remains. A strong contender for the finest overlooked American band of the mid-'60s, the Remains (led by Barry Tashian) were one of the most notable Boston groups of that era. But they never broke out nationally, despite signing to Epic, working as the opening act for the Beatles on their final American tour in 1966, and exposure on the Ed Sullivan Show and pop TV shows like Shindig. They were, and still are, often described as a garage band similar to hundreds that characterized the mid 60s. But the Remains had a lot of professional finesse to their straight-ahead attack and sharp songwriting with their energetic harmonies and guitar-electric keyboard blend.

Four fine singles for Epic found little action outside of the Northeast. Frustrated by the disparity they perceived between their studio work and their furious live show, the Remains broke up. Tashian played with Emmylou Harris for quite a while and also as a Nashville-based country-folk musician, often recording as a duo with his wife, Holly.

Their biggest single was “Why Do I Cry?” – all over Boston AM radio when released. It brings back memories of free street dances in the summer and the post-Christmas CYO dance where I danced with my wife-to-be for the first time.