I’m not sure what is the attraction between boys and: fire stations, trains, trucks, fill in the blanks.  Over the years I’ve maintained my interest in gasoline stations and railroad stations among other things.  For those two I think part of the link for me is to the unique architecture of those structures (in my teen years I briefly considered architecture as a career). Those structures can be totally functional, yet quite distinctive in design. You know them when you see them.  Not more than 20 miles from me is a small town wooden train station converted to a private home. That one is easy to spot as the owners purposely kept some features of the building intact – it looks like the train tracks were taken up just recently when in fact that spur line was abandoned many decades ago – a common story in New England. Other former stations and railroad outbuildings can be a little difficult to spot, but not if you train yourself (really, no pun was intended) to look for that distinctive railroad architecture.

Gasoline stations are the same way.  Roadside wooden buildings with an extended roof in the front held up by two pillars?  Probably a combo 1920s gas station and small store, especially if you’re in the South.  A compact art deco stucco building with a steeply slanted roof situated on an urban corner – now a ratty used car lot? Likely a candidate for a once spiffy 1930’s “fillin station.” Maybe ESSO or Sinclair.  I, for one, find it fun to spot and photograph these repurposed buildings.
I have a couple of kids’ picture books on the topic of gasoline stations, all vintage 50s readers, picked up at yard sales and used book stores. Aside from the architecture they display, the storylines make for interesting reading.
This boy doesn't know how to dress when visiting a greasy garage.  He looks like he's headed to a prom.  Must be a rich kid. 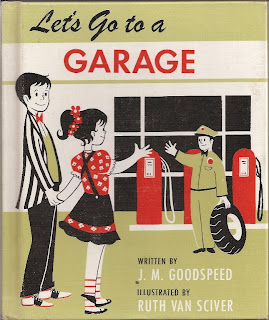 The Filling Station informs us: "The attendant is the man at the filling station. He puts gas and oil into the cars. He takes the money for the gas and oil. He keeps the money in a safe." Greedy capitalist! Where are the Occupiers when you need them? 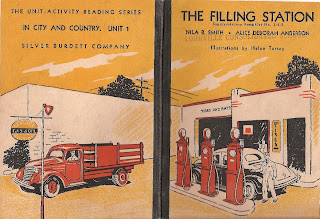 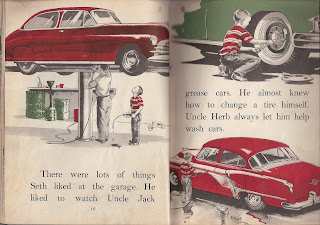 Were there no child labor laws in the 1950s??
Posted by Sponge-headed ScienceMan at 12:13 PM