Well, finally, my wife and I have got the recognition due us.  We are King and Queen of our neighborhood, the longest residing family in our neighborhood of about 30 homes.  Our neighborhood is linear, running east and west connecting two north-south roads in town.  The development started at the east end and filled in toward the west in stages.  We were the last stage built out when the roads and utilities were put in during the mid 1980s, a boom time for residential building in much of New England with pent up demand after the recession years in the early 1980s.

We had outgrown our older home in a settled neighborhood in the French-Canadian side of the city – the “West Side” as it’s called.  We knew an excellent home builder, the brother of a good friend of ours and decided to try to find a house lot in a neighboring town. Since these were boom times we got discouraged quickly as spec builders seem to grab up anything and everything coming on the market.  They wanted to build you a cookie-cutter house of their design – but no thanks. We gave up looking for a while until a realtor we’d worked with a little called us out of the blue about a house lot she thought we’d like.  The lot wasn’t for us but that got us charged up to start looking on our own again and we found a lot that spec builders hadn’t gobbled up (yet) and made a quick decision to buy.

The closing was in March 1985 but we were so settled on this one builder, Ronnie, that we were willing to wait until the following year if needed to get onto Ronnie’s schedule.  He was a popular guy – an honest builder with an excellent reputation and he usually just worked with maybe two helpers.  So he could usually take on only two houses a year, plus some smaller side projects.  Fortunately the one family ahead of us in the queue dropped out of the line when their intended lot failed its leach bed test (not in our neighborhood but the other side of town).  So Ronnie started our house that early summer and we moved in just before Thanksgiving 1985.

Spec houses were rapidly going up around us - fortunately by different builders so our neighborhood has a reasonable amount of variety of styles.  One other family behind us bought a lot and had a custom builder put up a very attractive Cape style home.  That family “beat” us by a few weeks and were the first to occupy a home in this new neighborhood.  Ironically the spec house next to us became occupied just a few weeks after we moved in. Then the rest of the neighborhood filled in over time, some lots being held for investment purposes were only built upon many years later, a few up to 10 years after the starting gun.

Like most newer communities, many first time residents only stayed a few years in their homes.  Changing jobs or the lure of a bigger home caused turnover and before long many homes had experienced several owners, including that spec house next to us.  But that Cape behind us?  Those guys were in for the duration it seemed, so we remained second fiddle, vice residents, second rate, whatever.

But, victory goes to the patient, I guess.  The Capers moved last week!  We waited them out.  Now we reign supreme over the land, our little dominion.  We just need to convince our subjects, errr, neighbors, to give us all the full respect we now deserve.  Dear, throw away that retirement community brochure.  We ain’t never leaving now that we're on top. 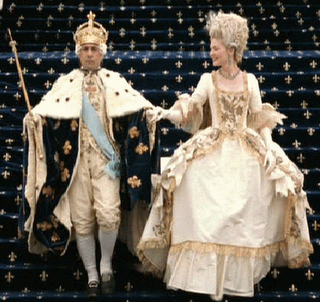 Long live the King and Queen!

Please, please, please do not use your recent coronation to become the equivalent of a condo nazi.

I see you failed to mention that along with the abnegation of their throne, the Capers also took a pack of screaming banshies...err, I mean sled dogs...who resided in a pen betwixt your two residences. I'll assume no foul play was involved in this recent power play!